Skip to chat with us. Skip to content
Book a virtual rapid antigen test so you’re ready to travel. Get your travel documents.

Everyone experiences cold and flu symptoms differently, but there’s something to be said about people who act or feel like they’ve been knocked out completely. You might have heard of – or been around someone with  – the man cold, where they’re essentially unable to function and quite often, refuse to see a doctor.

But is the man cold a real illness or just a name attached to those who can’t handle being sick at all? And if it’s real, why is it specific to those who are male and what makes it different from a regular cold? Here’s everything you need to know.

Is the man cold a real illness?

If this is the first question that comes to your mind, you should know it has been confirmed: the man cold is indeed real. Not everyone handles illnesses the same way regardless of physiological gender, and some health issues and conditions like kidney stones, breast cancer, and osteoarthritis differ significantly for men and women.

Research also shows that male and female bodies react differently to viruses. The female sex hormone estrogen slows down how fast a virus multiplies, leading to fewer cold and flu symptoms in women than men. Males often have more fevers, inflammation, longer recovery times, and tend to have a heightened response to infection. As well, studies show testosterone lowers the body’s immune response, which could be another contributing factor.

There are even theories that suggest the evolution of early man required a longer amount of time to rest while sick to conserve energy and avoid predators. What is for sure, however, is that when looking at men’s and women’s DNA there are differences, which is why reactions to viruses including the common cold don’t present themselves the same way for the two sexes.

Do all men get the man cold when they’re sick?

It’s tough to say if every male who gets sick will have a hard time getting through the day, but the science suggests they’ll likely feel pretty crummy. Certain people, however, tend to let their symptoms affect them greatly and aren’t able to carry on with their day, while others don’t. It’s important to keep in mind though that cold or flu symptoms that worsen over time, like a persistent cough or fever, shouldn’t be overlooked.

One Canadian doctor even warns that since males specifically tend to suffer more from the flu than females, considering male viral respiratory symptoms as exaggerated without careful scientific evidence could have serious implications. If symptoms do get worse, you should seek medical care as soon as possible as they could turn into something more serious, like pneumonia. It’s also a good idea to be proactive and help avoid getting sick if you can by receiving a flu shot each year. 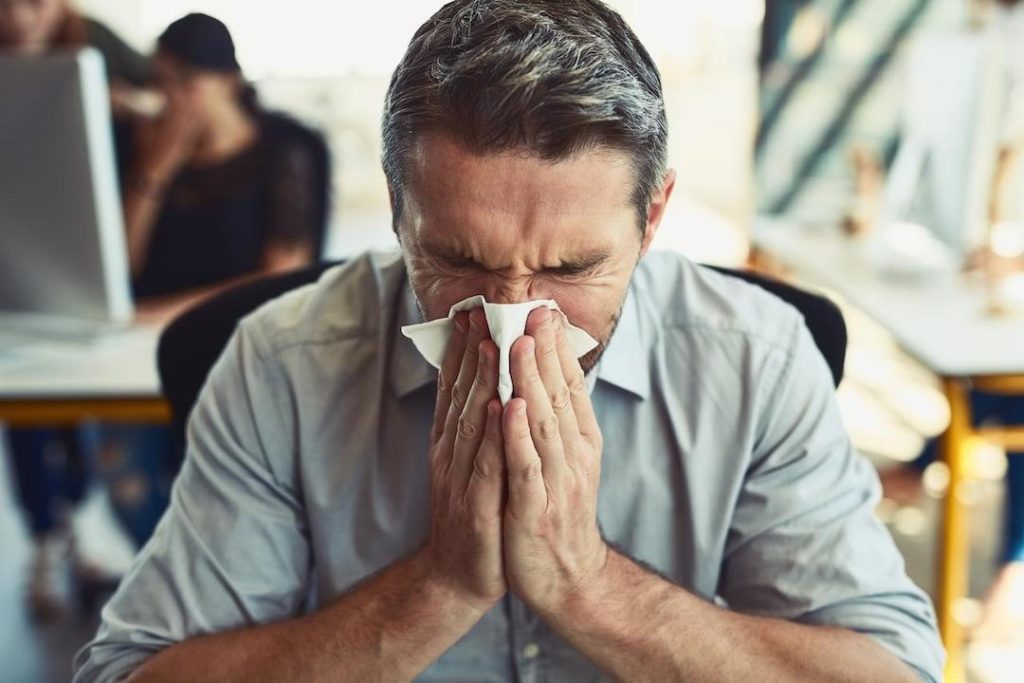 How long does the man cold last?

According to the Centre for Disease Control and Prevention (CDC), most adults recover from a common cold in about seven to 10 days. When it comes to the man cold or flu, symptoms will likely be more intense due to the body’s reaction to the viral infection, which means this type of illness may last longer.

What can you do to recover sooner?

Just like a typical cold or flu virus, there’s no real way to “cure” the man cold. Colds aren’t caused by bacteria you can take antibiotics for and there isn’t one single virus that causes you to be sick – there are actually over 200 of them. To help relieve symptoms, try:

While viruses present themselves differently in men and women, anyone can experience intense symptoms. Remember to get your flu vaccine as soon as possible to help reduce your chances of getting sick this year. One thing’s for sure though – the man cold is real and as winter approaches, it’s likely to return.

When it comes to a typical cold or flu virus and the man cold, however, if you’re experiencing symptoms like a fever that won’t go away, having trouble keeping food or liquid down, or a persistent cough, speak to a doctor right away as it can turn into something more serious, like pneumonia. For care in under two minutes, you can speak to a Canadian-licensed doctor on Maple without leaving home from your phone, tablet, or computer.

What are seasonal allergies and how do I manage them?